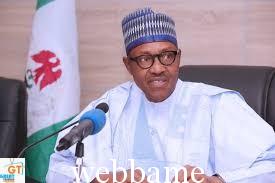 In what appears like a subtle reference to Mr Sunday Adeyemo a.k.a Sunday igboho and his likes, President Muhammadu Buhari on Tuesday ordered the nation’s security chiefs to recover all areas being occupied by insurgents, bandits and kidnappers across the country.

The meeting was presided by Buhari at the Council Chamber of the Presidential Villa, Abuja, on Tuesday.

He said  no sovereign nation will allow a group of non-state actors to bring it down to its knees and render the state in state of panic, apprehension, mistrust and disorder. “Therefore, both the defence and intelligence organisations have been charged that while we look forward to having a peaceful, non-kinetic resolution, we will not allow this country to drift into state failure. “And with effect from today, the new service chiefs have been given directives by the Minister of Defence, conveyed by the President to the Minister of Defence, to reclaim all areas that have been dominated by bandits, by kidnappers and other scoundrels of scallywags. “In doing so, I’ve also asked all the intelligence agencies to collapse all their efforts onto one platform, so that with the convergence of efforts, we will be able to give the required intelligence to the operational elements of government.

“Now, I need to stress also that there are individuals in this country who have assumed a status that is beyond what they should be.  The intelligence from our own sources, the intelligence at my disposal and the disposal of the other intelligence hence, reveals that we have certain entities, certain individuals who are making capital out of insecurity, especially kidnapping. “This is a situation that has to be brought to an end and I’m sending a warning to anybody who is hiding beneath a veneer of some status, whether official, in terms of an official capacity or traditional or religious, to stoke the flames of disorder will have himself to blame.

“The government is very serious about this. Like I said, we’re drifting into a situation that we can no longer afford to lose lives. “We are not going to be blackmailed, we’re going to use whatever is at our disposal, while operating within the confines of legitimacy, within the confines of legality, but the government has a responsibility to assert its will, using the instruments at its disposal to keep the state moving, alive, happy in prosperity, this will not be compromised,’’ he warned.

Monguno revealed that the meeting also deliberated on issues of freedom of citizens to reside wherever they wish to reside as stipulated in the Constitution of the Federal Republic of Nigeria. “While at the same time, the government endorses that anybody who is a criminal, who acts on his own outside the law, should be brought to book wherever he is, but the issue here is that when we continue to pitch ourselves against each other, then this problem will only continue to be magnified.

“Therefore, Mr President has charged each and every one to be mindful of this situation because once we start to profile ourselves along ethnic or religious lines, then there’ll be no end to it. “We’ve seen what has happened in so many countries around the globe, and we do not want Nigeria to fall into that type of situation. “I think we’ve had enough of violence, enough of chaos, enough of anarchy, but I want to stress once more that any individual or group that thinks it can take it upon itself to cause disunity, disharmony and push the country to the brink should have a rethink.

“Any individual who thinks he has any support, who thinks he can undermine this government, anybody, any human being, as long as it is a citizen of this country, any one person who thinks he’s the cat’s whiskers, or he can be rocky on the perch and lead us into a situation of unhappiness, will have himself to blame at the end of the day,’’ he added. The NSA further disclosed that the president had already given directives to the military and intelligence organisations to trail and flush out all the people that had been on their watch list