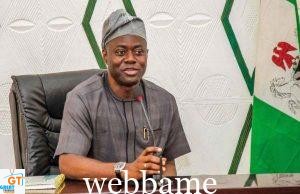 Oyo State governor, ‘Seyi Makinde, on Monday, said that his administration will continue to engage with the civil society groups to enhance its efforts on delivery of sustainable development.
The governor, who was represented by his Special Adviser on Strategy and Political Matters, Hon. Babatunde Oduyoye, stated this while receiving a delegation of the state’s chapter of the Civil Society Coalition on Sustainable Development (CSCSD), at the Governor’s Office, Agodi, Ibadan.
He stressed that Governor Makinde’s administration would keep on collaborating with the group to ensure that democratic tenets are upheld “and to ensure that we do not renege on our promise to be open and allow youth inclusion in whatever we do.”
He added: “We know what sustainable development is all about and the government is passionate about ensuring that not only do we meet the needs of today but to ensure that the needs of younger generations are not compromised.
“In the same vein, when most people are talking about sustainable development, what comes to their minds is the environment but it goes beyond that; we have to ensure sustainable development too when it comes to societal needs.
“We know that we must also try as much as possible to ensure that our policies on education and health are sustainable; we have not just been thinking about what to do for the moment, our policies are being implemented in such a way that the future generations are being put into consideration.”
While asserting that the state government has been carrying the youths along in its programme, the governor added that the government is equally gender-sensitive.
He maintained that the government’s door remained open to civil society groups, assuring that the government will keep on interfacing with them.
“The government, including Commissioners, Special Advisers, Senior Special Assistants in the various positions have been working to ensure that there is service delivery in the activities of government and that there is openness on the part of government.
“So, I want you to come up with your proposals for scrutiny and make appropriate recommendations to his excellency,” he added.
On the expertise of some of the members of the group, he said that Makinde’s administration is open to exploring the God-given talents of the young, middle-aged and the old people in Oyo state.
In their separate remarks, the Special Adviser on Media to the governor, Mr. Jide Ajani and the Chief Press Secretary to the Governor, Mr. Taiwo Adisa, acknowledged the importance of civil society groups in democratic government.
The duo assured the group that the meeting would further enhance a mutual relationship with the present administration in Oyo State.
Adisa maintained that the government acknowledged the contributions of some of the group members on certain occasions, saying there are a lot of things the group can contribute to the overall development of the state.
Ajani equally urged the group to relate freely with the office of the Special Adviser on Political Matters, so as to derive the necessary benefits for the people, admitting that the present government is youth-friendly.
Earlier, Mr Kola Hamsat-Gbenla, the CSCSD’s State Coordinator, disclosed that the group was a coalition of over 2,000 registered bodies across the six geo political zones of the country.
“But we are close to 100 in Oyo state, it is a coalition of networks, NGOs, individual and faith-based organisations, among others.
“We are here today firstly to show our appreciation to the Governor Seyi Makinde-led government, for a series of developmental works that have been happening for close to two years.
“We have seen infrastructure development across the state. Secondly, we are here to inform the governor through your office that we have members that have expertise across the 17 sustainable development goals.” he added.
Hamsat-Gbenla said his members are ready to work, partner, and collaborate with the state government so that people of the state could enjoy the dividends of democracy.
The coalition called for continued engagement with the government, stating that it has been extending its hands of fellowship to the administration since its inception in office close to two years ago.
The deputy state coordinator, Oluwabukola Olatunji; Adebobola Agbeja, state youths coordinator; Abdullamid Yakub, state secretary of the National Youth Council of Nigeria and Segun Taiwo, a youth wing member, were among members of the delegation.