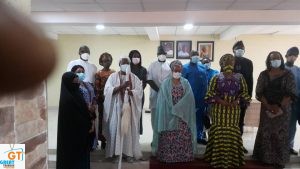 A frontline monarch in Ekiti State, HRM Oba Festus Olatunji Olatunde Onimesi of Imesi has counsels, that for the Federal Government Social Investment project- tagged At Risk Children Initiative (ARC-I) not to go the way of similarly well conceived project,it should be tailored towards capturing the data of the children projected to be direct beneficiary of the laudable scheme.
Oba Olatunde, who represented the Ekiti State Council of Traditional Rulers at a stakeholders’ meeting in Ado Ekiti, on Tuesday, made the submission while contributing to a special session held during the meeting.
Present at the session were the First Lady of Ekiti State, Erelu Bisi Fayemi, the Special Adviser to the President on Social Investment, Mrs Mariam Uwais, top government functionaries and representatives of religious bodies.
Oba Olatunde said: “If good initiatives like ARC-I will not go the way of similarly good project, it should be given a solid foundation, based on data of children projected to be the beneficiaries of this laudable initiative.”
He commended the wife of the Ekiti State governor, Erelu Bisi Fayemi, for her numerous initiatives, including the Sexual Assault Response Centre; Transit Home for Abused and Troubled Women and Children; and Iworoko Women Vocational Centre.
Others included “Drop the Blade” (where local circumcisers are encouraged to drop their tools in exchange for other trades); Support for Families With Multiple Births; GBV Prohibition Law 2019 and Rape and Beg To Go To Jail, among others.
The royal father also canvassed for the establishment of private hostels in urban areas to take care of children, especially female pupils who, he said, roam the streets between the hours of 2 pm when schools close and 7pm when their busy parents arrive home to provide dinner.
Speaking at the meeting, the Special Adviser to the President on Social Investment, Mrs Mariam Uwais, commended Ekiti State for taking the initiative with all seriousness.
She also noted the observation made by the Onimesi of Imesi in respect of the data collection and thanked the traditional ruler for making such an useful input.
Also speaking, Erelu Bisi Fayemi, commended the Federal Goverment for the initiative which she said is timely and coming up when it is most needed.
She said the figure of children at risk in Ekiti is gradually reducing as a result of government’s focus on child rights and welfare and noted that school enrollment of children has reached an all-high 20,000 increase in primary school enrollment in the last session.
Thanking Oba Olatunde for his contribution, she appealed to him to convey to his people the message of community intensive involvement in looking after the child as a way of reducing exposure to risks and social vices.
She also commended the traditional ruler on his effort at soliciting necessary support of Ekiti indigenes in the Diaspora for children at risk during the last school enrollment session.
The highpoint of the stakeholders’ meeting was the signing of a Memorandum of Understanding (MoU) between the Federal Government and the Ekiti State governmeny to ensure that the stage benefit immediately from the initiative.